Latri Nyima Dakpa Rinpoche gave Teachings based on Kusum Rangshar text. The Teachings took place in Wilga (Chamma Ling Center Near Warsaw)from April,29 till May,4 ,2014. The text is composed by Shardza Tiashi Gyaltsen – a great Dzogchen Master of XXth centiry who attained a rainbow body in 1935.

During the retreat there were several sessions of sky gazing.

The participants also practiced  ‘the four generocities” (Sang, Sur, Chotor and Chod) between the Teaching sessions.

This week was an unforgetable experience for all the participants. 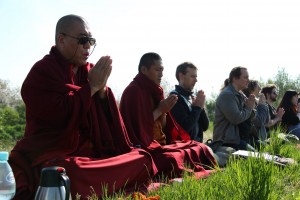