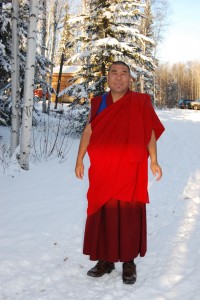 My name is Latri Khenpo Nyima Dakpa Rinpoche. I am the Ab­bot and lineage holder of Latri Monastery in the Derge area of the Kham region of Eastern Tibet.

I grew up in the first Bon refugee community in Nepal, lo­cated in Dorpatan. My family is the lineage holder of the Latri lineage. My father, Latri Gyaltsen Nyima (that is his spiritual name), he is also well known as Nagwang Rinchen, was the third reincarna­tion of Tsultrim Phuntsok, a great practitioner of Eastern Tibet. When I was six years old, I began learning to read and write Ti­betan. At this time I also started my religious studies under the guidance of my father and Tsultrim Nyima Rinpoche, the Abbot of the monastery at Dorpatan. When I was thirteen, I moved with my family to Kathmandu, Nepal, where I worked in a sweater business and also mastered the art of carpet design.

The Bonpos (followers of Bon) now living in Kathmandu originally lived in the Dorpatan area. Most of them are devotees of Tewa Monastery, located in the upper region of Tibet. My father held the position of a lama of Tewa Monastery. Since there were no other Bon monasteries in Kathmandu at that time, he assumed the responsibilities for all the annual Bon religious activities. His goal was to keep the Bonpo community close together and for the young people in the community to have a firm connection to their original Bon culture. For that reason he and three elders estab­lished the Bonpo community Te Bon Kyi Dug and took care of all spiritual ceremonies for the people of Tewa until he died in 1987. This organization is still active today in Kathmandu. It partici­pates in all religious activities at Triten Norbutse Monastery and serves Bonpos in as many ways as it can.

When I was fifteen, my father took me to Menri Monastery in Dolanji, Himachal Pradesh, India, to be ordained as a monk and educated there. As my father was getting older and did not know what was going to happen to Tibet in the future, he wanted me to become a spiritual master and skilled religious practitioner so that I could be of service to the Bonpo community. However, I became very homesick and eventually returned home to Kathmandu.

In 1977 the senior Menri Lopon, H.E. Sangye Tenzin Rinpoche, sent a message to my father asking him why I had not become a monk yet. My father then expressed that it was his wish that I return to the monastery to become a fully ordained monk. I was very touched by this, and I realized that as the eldest son with the name of the lineage holder Latri, it was my duty to become a monk and serve the Bonpos. I knew within my heart that it was the proper time for me to accept this responsibility. That same evening, at a family gathering, my father talked about the message from Ponlop Sangye Tenzin Rinpoche and added that it had al­ways been his wish that I become a monk. He said, “If you were to take monks’ vows, it would make me happier than if I had been given the size of a sheep’s head in gold.” My entire family encour­aged me to accept the challenge, and I decided to return to Menri Monastery in Dolanji.

During the observance of Tibetan New Year, on the birthday of the Second Lord, Nyamed Sherab Gyaltsen, which is the fifth day of the first month of the Tibetan calendar, I took the vows to become a monk from H.H. the 33rd Menri Trizin and H.E. Yongzin Tenzin Namdak Rinpoche. Since that day, I have been cared for and guided by H.H. the 33rd Menri Trizin, the spiritual head of Bon.

In 1978 I was among the first students to enter the newly founded Bon Dialectic School, the monastery school where philosophy (Dho, Ngag, and Dzogchen), astrology, medicine, and all the other traditional Bon disciplines are taught. There I received all my teach­ings from H.E. Yongzin Tenzin Namdak Rinpoche and Lharam Geshe Yungdrung Nam Gyal.

I made a commitment not to take any vacation before gradu­ating from the Bon Dialectic School. Even when my parents wrote to ask me to join the family for the Tibetan New Year festivities, I kept this promise and did not join them. I did not return home until 1987 after having received my Geshe degree, which is the equivalent of a Ph.D. degree.

Since 1978 I have been assisting H.H. the 33rd Menri Trizin with the administration of the Monastic Centre as well as Central School for Tibetans (CST) in Dolanji. I also represent His Holi­ness at meetings and conferences held away from Dolanji. Fur­thermore, I was of service to the orphanage until my graduation from the monastery.

In 1982 my father and brother Lhakpa traveled to Tibet to visit Latri Monastery and the people still living there. I had re­ceived several letters from these people, asking me to join them in Tibet to take over the responsibility of educating the young monks of the monastery. For this reason I traveled to Tibet in 1987. There, in addition to visiting Latri Monastery, I also made a tour of thirty- eight other monasteries. The purpose of these visits was to strengthen the communication and connection between the Bon monasteries in India and those in Tibet. My most important visits were to Menri Monastery as well as Latri Monastery, where I was enthroned as Abbot.

In 1988 I returned to Menri Monastery in Dolanji. In April of the same year His Holiness the Dalai Lama visited the monastery. During this visit, H.H. the 33rd Menri Trizin discussed the school system of Dolanji with H.H. the Dalai Lama. The school had only six grades and H.H. the 33rd Menri Trizin asked for permission to add grades 7 and 8, so that the children would have even more opportunity to study their original Bon culture. H.H. the Dalai Lama agreed to the project and wished that as many children as possible could be brought to Dolanji to be raised according to the Bon culture. The Education Minister of the Tibetan Government- in-Exile at that time, Juchen Thupten, gave ten thousand rupees for the project. H.H. the Dalai Lama added that this money was given to mark the beginning of a new project.

At the request of the people of Dolanji, H.H. the 33rd Menri Trizin entrusted me with the official permit to expand the school. All the necessary documents were filed with the Indian govern­ment, and I was assigned the responsibility to gather children from the different Bonpo communities to be sent to attend the Bon school in Dolanji. I made an official visit to Kathmandu in order to talk to the local Bonpo community about the project and spread this information to Bonpo communities in Dolpo, Lubrak, Zomsom, and Tankye, as well as remote areas of Nepal, Bhutan, Sikkim, and India.

In addition to the school project, H.H. the 33rd Menri Trizin gave me the assignment to set up a home for girls and boys in Dolanji so that they would have the opportunity to receive an education. This was in perfect harmony with my own desire to help and sustain Bon children, and I was more than pleased to accept the task. In 1988 I established the home known today as the Bon Children’s Home. This is the first and only Bon organiza­tion that raises both boys and girls together. Here they not only find a place to receive an education, but also a real home. I still serve as Director of the Bon Children’s Home.

Most of the children at the Bon Children’s Home are from very remote Bonpo communities such as Dolpo and Lubrak in Nepal. In the beginning, there were forty-five children. Today the number has grown to 253 children between five and twenty years of age. Some of them have already been graduated from the school in Dolanji and are continuing their education in Shimla, Varanasi, and Dehradun. I also serve as the chairman of the local advisory committee of the Central School for Tibetans in Dolanji.

In 1987 I created and became the editor of “Bon Go” (“Door to Bon”), the only Bon magazine published in the Tibetan lan­guage. The publication team currently has six members and will soon publish the sixteenth issue of the magazine.

In 2002, with the blessings of H.H. the 33rd Menri Trizin, I oversaw the construction of a new three-story school building and playground in Dolanji, which included adding a fence around the school’s campus. Also, after much administrative consultation, we were able to expand our CST from the elementary and middle- school grades to include secondary grades nine and ten. Later on we were able to expand further by adding grades eleven and twelve, and thus we now have a complete high school.

Since 1991 I have traveled yearly to the United States and various countries in Europe, such as Austria, France, Germany, Poland, Belarus, Russia, Ukraine, and Switzerland, in order to spread the teaching of Bon and raise funds for the Bon Children’s Home. I return regularly to give teachings at the Bon centers that I have founded. These are the Yeru Bon Center in Los Angeles  and Tise Ling, Alaska, USA , Shen Chen Ling in Minsk (Belarus), Shardza Ling Institute in Poland, Bon Gyi Drup De, Donetsk and Bon Shen Drup De, Kharkov in  Ukraine and Yeru, Montreal in  Canada.